In the news this week: A new study by the National Workgroup for Safe Markets cites  significant concerns about the level of BPA, a chemical in the epoxy linings of metal food cans, and suggesting that pregnant women should avoid canned foods to limit how much BPA they consume. The report has generated a lot of buzz at the Cheap Like Me Facebook page (come “like” us if you haven’t already!).

BPA (short for bisphenol A) is entwined in our food cycle. It is used in can linings, many plastic bottles and even in paper receipts. The study took random samples of canned foods from different locations around the United States and Canada, and found BPA in 92 percent of the samples. Fast Company pointed out that the BPA levels this study found are five times higher than levels found a decade ago.

The new study tracked BPA in the biological systems of study participants, which is a first step to understanding how this chemical works on our bodies. The study checked actual BPA levels in study participants (including cord blood and breast milk) and arranged hypothetical meals using many canned foods, in a diet that might be typical of a lower-income person attempting to eat healthily by including canned foods.

Where is BPA found?

The NWSM report has this to say:

Our findings quantify exposure through only one BPA source—canned foods. Other potential routes of exposure to BPA include air, dust, and water, common products like polycarbonate water and baby bottles, 5-gallon water coolers, and printer inks, toners and thermal receipt paper (used by most gas stations and supermarkets), where BPA can rub off paper onto our hands and into our mouths.

Of course, it’s also found in us — BPA can be measured in the urine of 93 percent of the U.S. population (according to the CDC), and the Environmental Working Group found BPA in the cord blood of newborn babies.

What’s the problem with BPA?

The NWSM report summarizes some of the scientists’ concerns with BPA:

Exposure of animals to low doses of BPA has been linked to cancer, abnormal behavior, diabetes and heart disease, infertility, developmental  and reproductive harm, obesity, and early puberty, a known risk factor for breast cancer.

BPA is suspected or known to be an endocrine disruptor, meaning a chemical that messes with our bodies’ natural sense of how to regulate our hormones and organize our systems to face life. Endocrine problems can cause all kinds of problems, from individual fatigue and auto-immune disease to species-wide problems with reproduction.

Other views on BPA

The new study isn’t the first to criticize BPA, and concerns seem to be mounting.

If you would like to read what the chemical and plastics industry has to say about BPA, you can go to their website, where they have fact sheets available.

Meanwhile, decide for yourself if you want to avoid BPA in your foods.

How to avoid BPA

BPA is present in many plastics (especially polycarbonate) and in the linings of canned foods. You can avoid some of this exposure:

How to learn more

The Environmental Working Group has developed a detailed timeline of BPA regulations — you can learn about the ins and outs of BPA regulation historically, proposed state legislation to ban BPA,  and voluntary efforts not to sell BPA-containing products, especially baby bottles, in the United States.

Last year, Fast Company published a lengthy article about the history of studies on BPA. The article is an extensive review that goes into the convoluted process by which BPA has been declared mostly safe, so far.

And if you don’t believe all this and have six minutes, check out this Fox News video a reader posted on the Cheap Like Me Facebook page: 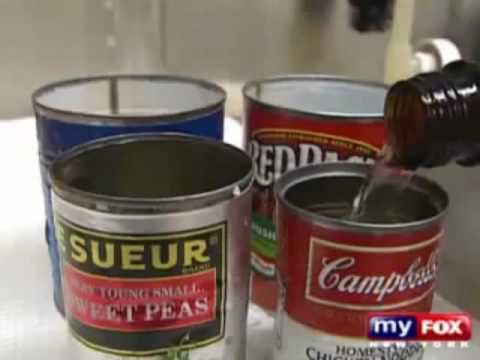