March is national craft month — the perfect time to focus on doing crafts … on the cheap.

This post is not so much a tutorial as an example of what we can do to re-use, repurpose, economize — and still enjoy hobbies, tools and skills. I hope it will inspire you to listen to that voice inside that says “I bet I could …” — and then make something great.

At my house, I am loaded with yarny goodness. I’ve knitted off and on over the past 15 years, but two years ago, at our local Renaissance festival, my mother-in-law bought me a drop spindle telling me that since everyone else was getting a souvenir, I should get one, too.

Once I started spinning with that drop spindle, I’d caught an obsession. Within a few months I had acquired a spinning wheel. Spinning gave me a new appreciation for yarns, and I got back into knitting again.

I have tried to economize where I can. I am proud to say that my pricey tools have all been acquired secondhand. But all the yarn I spin, and most of the yarn I buy, comes in skeins. These are long loops of yarn — easy to make after spinning, great for washing the yarn, and not very nice for knitting.

If you knit from the skein, you would soon have a tangled mess. So knitters use a ball winder to wind the skein into a ball. The tool to hold the skein for winding is called a yarn swift. Typically, swifts spread out like an umbrella to hold different size skeins. They revolve so the ball winder can neatly pull the yarn and wrap it into a ball. And swifts usually cost $50 up.

Then my neighbors put out a broken wood patio umbrella. Ah ha! Mr. Cheap had his doubts, but by purchasing a lazy Susan and some screws, bolts and nuts, I turned it into a functioning swift for $5. Here’s how:

1. I waited till everyone left me alone so I could work in peace. First, I sawed off the “stand” of the umbrella just below the part where the arms attach. Then I evaluated the umbrella. All arms were present, but two of them were broken — one at the hinge, one at the base.

2. I decided to cut the arms off at the hinge and sand off the rough spots. (Mr. Cheap did the sanding when he got home. He’s patient like that.)

3. I fixed one arm that had a broken connection between it and the wire that goes around the top of the swift. I was going for function, not form — and did I mention my lack of patience? I unbent a picture hanger and used a staple gun to attach it to the wood arm.

4. I identified one more spot where one arm was broken off so that it was disconnected from the hinge (a part where the metal rod should have been encased in wood to form a hinge).

5. I fixed this spot up with another picture hanger — this one brass to go with the rod. I wasn’t sure if it would need to move, so I made it “swingable,” but that wasn’t necessary.

I used a pencil to mark the exact center of the square piece of wood. First, I measured — it wasn’t precisely square, so I drew lines to indicate the edges of the would-be square. Then I used a straight edge to draw an X from corner to corner. (The lazy Susan mechanism would be sandwiched between the two pieces of wood.) Next, I drilled pilot holes for the lazy Susan, based on the instructions that came with the package. I messed up (I’m no woodworker!) and did it again. The mistakes didn’t matter, as they would be hidden inside the lazy Susan sandwich and didn’t affect the integrity of the wood. 8. I used a long screw (about 3″) to go through the center of the square piece and into the wood base and center pole of the swift to hold the “umbrella” structure onto the base. This was the only frustrating/challenging aspect of the project. I used a vice to hold the pole and enlisted help to hold the square piece while I used a drill to screw it together. I don’t have a photo of that step, but in this shot you can see the open center of the lazy Susan mechanism through which I drilled into the base of the umbrella. The screw went right through the center of the X.

9. I used a large drill bit to drill holes in the outside of the rectangular piece of wood. Then I drilled holes for the small threaded bolts (sticking up in the photo above) to go through. Then I attached the nuts to the bolts using a small screwdriver with a nut wrench included. The holes aren’t especially neat (did I mention I’m not a woodworker, and also impatient?), but they are unseen beneath the swift. One could even glue a piece of felt to cover the whole base, to disguise ugly holes and protect furniture.

At last, I was finished! The swift stands up neatly for storage:

To use it, I open the “umbrella” and plug the peg (attached to a chain) into the hole at the top of the umbrella (this might have been the bottom, previously), which holds it open.

I use these clamps to attach it to any surface I like. The clamps, of course, are useful for any number of other projects.

The yarn extends from the swift to the ball winder:

I have thought about getting some mini-clamps to make adjustable “stops” to  hold any size skein on the arms. In the meantime, I use clothespins. 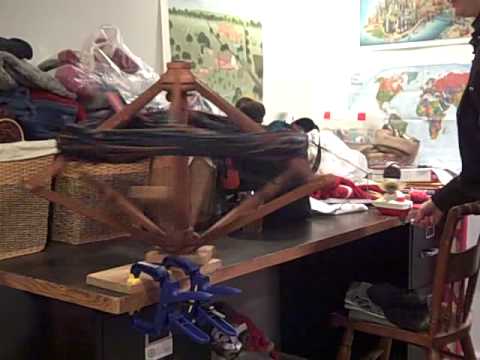 If only it would also clean up my craft table when it was finished ….